In the previous months, I was searching for some interesting AI algorithms to study and I’ve come across one of the coolest things I’ve ever seen in my life, Boids Simulation. Boids simulation or flock simulation is about imitating the behavior of fish schools or any other flocking animal behavior in nature.

It was first introduced by Craig Reynolds in 1986, his website is a little bit outdated but still has the best information and coolest examples.

As usual I’ve created an application, a basic model of boids simulation which consists of only 2 simple rules. Of course more rules can be added to achieve more complex behavior.

These 2 simple rules are:
1. Separation: To avoid crowding with local boids.
2. Cohesion: To move towards the average position of the local boids. 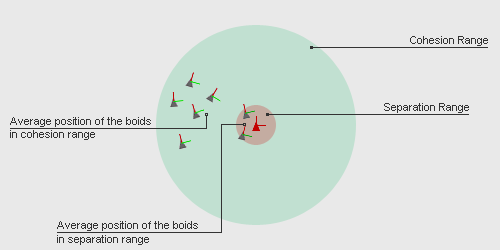 On the top-left corner of the application, there is the user interface. With it, you can see the number of boids currently simulated, add or remove boids, make the application full-screen and control the boids’ behavior. There are 2 types of behaviors for the boids, the first and the default one is wandering behavior and the second one is following behavior. Actually, wandering behavior is also a following behavior, in wandering mode, boids follow the green circle and in following mode, they follow the mouse pointer. Red circles are obstacles, you can drag and drop them anywhere you want.